Hyacinth (Hyacinthus orientalis) are a spring-flowering bulb that have been in cultivation for more than 400 years. They originated in the eastern Mediterranean and are sometimes referred to as Dutch Hyacinths to differentiate them from the small Grape Hyacinth (Muscari armeniacum) or the aquatic plant Water Hyacinth (Eichhornia crassipes).

Hyacinths have a strong, sweet fragrance and are a long-lasting cut flower in a vase. They are also easy to force into early indoor bloom in the winter time.

The National Garden Bureau has declared 2021 as the #YearoftheHyacinth. At one time there were more than 2,000 named cultivars. Today, there are less than 50 cultivars available. They come in shades of blue, pink, yellow, peach, and white. Popular cultivars include ‘Delft Blue’, ‘Gypsy Queen’, and ‘City of Haarlem’.

For best selection, order your bulbs in spring. Plant the bulbs in mid-autumn, the same as you do with Tulips and Daffodils. They need a sunny location with well-draining soils, to prevent the bulbs from rotting.

Cut off the flower spikes as soon as the flowers fade to encourage the hyacinths to store more energy in their bulbs and return next year. For this same reason, do not cut back the foliage until it also starts to fade.

After several years, the bulbs can revert to the original single-flowering species, so you may wish to replenish your plantings with fresh bulbs annually.

And on bonus aspect to Hyacinths is that they are deer-resistant. The bulbs themselves are poisonous, so squirrels don't snack on them either.

Hyacinth - You Can Grow That!

Pin this for later! 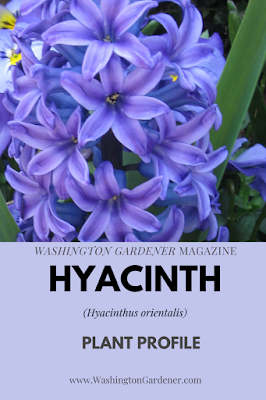