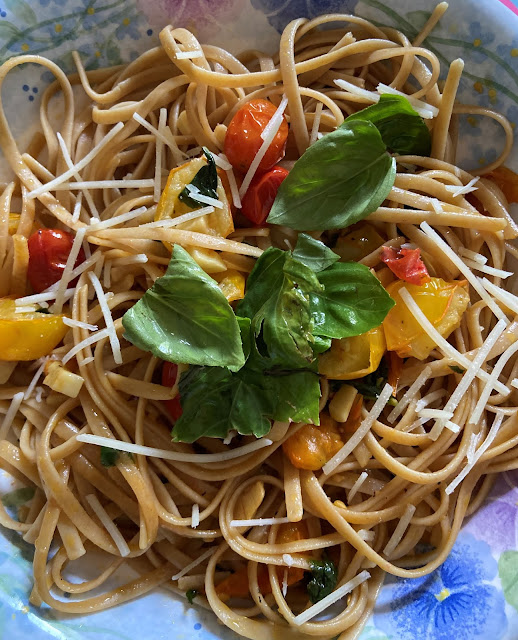 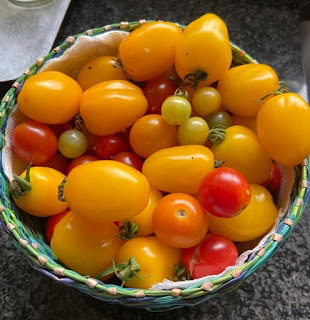 For this week, I picked two pints of gorgeous and delicious cherry tomatoes grown in our community plot by a fellow intern,Hadley Baker. You can make the tomatoes in this recipe as structured or saucy as you like — for a saucier dish, keep the tomatoes on the pan for longer. This recipe makes four dinner servings. 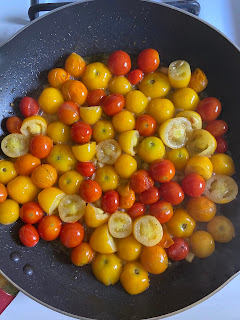 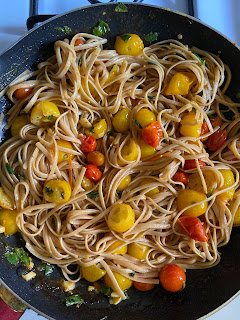 Steps:
·  Cook pasta al dente, according to package instructions.
·  Meanwhile, warm olive oil in a pan. Once it’s shimmering, add garlic and cook until fragrant.
·  Add tomatoes, salt, pepper, and lemon pepper and cook until tomatoes burst, stirring occasionally.
·  Once the tomatoes have reached your desired level of sauciness, add basil. When the basil is incorporated, add pasta to the pan and mix until the sauce covers pasta well. Serve with cheese and top with basil.

"Savory Sunday" is a weekly summer blog series with seasonal recipes from the garden.
About the Author:
Anastazja Kolodziej is a rising senior at the University of Maryland, double majoring in multiplatform journalism and the classics (Ancient Greek and Latin). On campus, she serves as an assistant managing editor at The Diamondback.
at August 09, 2020 No comments:

GardenDC Podcast Episode 23: Summer Cocktails, a Defense of the Lawn, and Tips for Growing Cucumbers

This episode, we chat with returning guest Marianne Willburn about summer cocktails and she makes a case in defense of the lawn. The plant profile is on cucumbers and I share my love for the 'Green Cloud' container lotus. 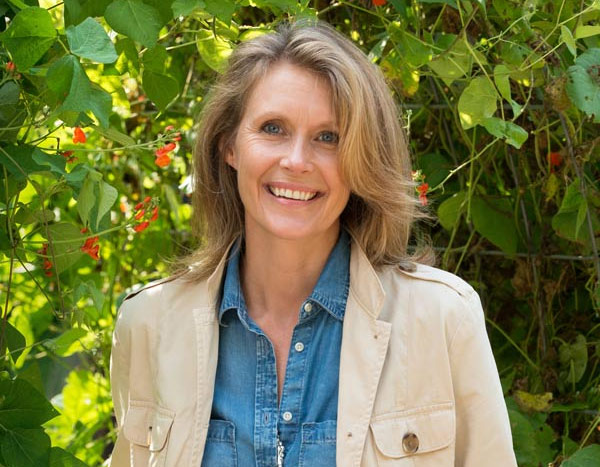 BTW, YOU can become a listener supporter for as little as $0.99 per month!See how at: https://anchor.fm/kathy-jentz/support.

The episode is posted at: https://anchor.fm/kathy-jentz/episodes/August-8--2020---Summer-Cocktails--a-Defense-of-the-Lawn--and-Tips-for-Growing-Cucumbers-ehq13k

It is also available on -

We welcome your questions and comments!


You can leave a voice mail message for us at: https://anchor.fm/kathy-jentz/message Note that we may use these messages on a future episode.
at August 08, 2020 No comments:

For this week's community garden report, we are turning it over to one of our summer interns to let us know how their growing project went. 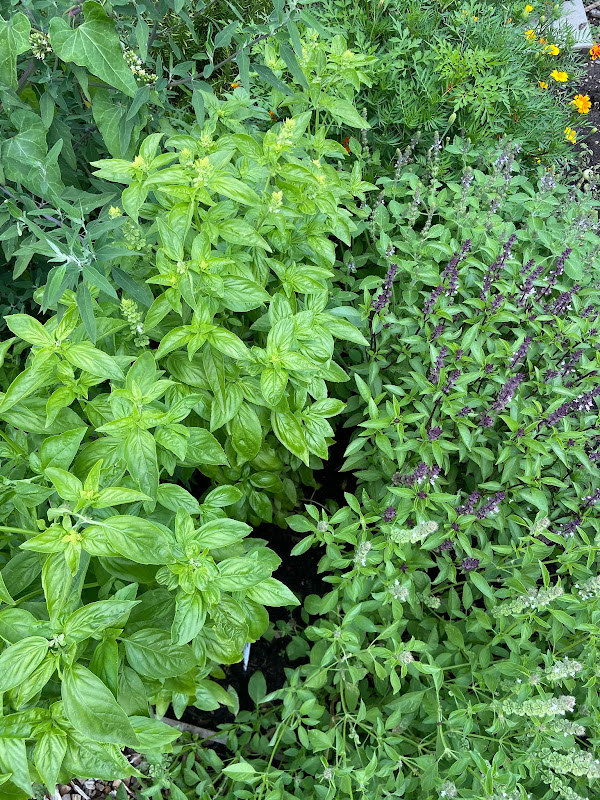 This summer, I grew basil in the community garden plot. My family grows basil in a pot on our balcony, but growing it in the ground was a different experience — while the potted basil remains only a few inches tall, the basil in the plot grew large and bushy.

At the start of June, I planted six types of basil in the plot: lime, Thai, Tulsi, and three 'Prospera' Genovese basils from starter plants, as well as ‘Profumo di Genova’ Genovese and Mrs. Burns’ lemon basil from seed. Unfortunately, neither of the basil types I planted from seed grew, leading us to believe the seeds were bad.

I planted the starter plants about 4-5 inches deep in the ground and around a foot apart from one another. The seeds I planted by scattering them close to each other in an approximately three-foot-long line, which I covered about a quarter-inch deep.

I visited the garden weekly to weed and — once the basil had grown larger — pick off the plants’ flowers. My potted basil has never grown large enough to flower, so this was a surprise for me, but I quickly learned that removing the flowers is vital to ensuring that the basil plants spend all their energy on growing leaves.

By mid-July, the 'Prospera' Genovese basil plants had grown to about 1-1.5 feet tall, while the lime, Thai, and Tulsi basils had grown bushier rather than significantly taller. Now, in early August, two months after they were planted, the 'Prospera' plants are 2 feet tall, with the three others at around a foot tall.

The 'Prospera' basil is a type of basil specially bred to resist downy mildew. There was no issue with mildew this summer on any of the plants, though it was a very hot and humid summer. The 'Prospera' Genovese basil had the classic basil taste and leaf shape, as well as fairly small flowers.

The suitably-named lime basil had a sweet and citrusy flavor, which made it my favorite type. It grew very bushy — so much so that it hung out onto the walkway — and its flowers grew large pretty quickly.

The Thai basil was somewhat tangy and spicy. It had dark purple stems and flowers, which helped with removing the flowers, as they were easier to distinguish from the leaves.

The Tulsi basil was both sweet and bitter, a bit reminiscent of the Thai basil. In appearance, it was similar to the lime basil, with large, light purple flowers and fuzzy stems.

I used basil from all these plants to make a pesto-like basil sauce for a Savory Sunday basil mushroom pizza recipe. The various types of basil have notably different flavors, and mixed together, they gave the sauce additional levels than if I had just used the standard Genovese basil alone.

All four types of basil that I grew from starter plants were easy to maintain, although removing flowers became a lengthier process as the plants became bushier.

About the Author: Anastazja Kolodziej is a rising senior at the University of Maryland, double majoring in multiplatform journalism and the classics (Ancient Greek and Latin). On campus, she serves as an assistant managing editor at The Diamondback.
About Fenton Friday: Every Friday during the growing season, I'll be giving you an update on my community garden plot at the Fenton Street Community Garden just across the street from my house in zone 7 Mid-Atlantic MD/DC border. I'm plot #16. It is a 10 ft x 20 ft space and this is our 8th year in the garden. (It opened in May 2011.) See past posts about our edible garden by putting "Fenton" into the Search box above.
at August 07, 2020 No comments:

Canna is an annual tropical flowering plant that lends drama to the landscape with its fabulous foliage and colorful blooms in mid-summer in our Mid-Atlantic region. The foliage can be green, bronze, burgundy, solid, or striped. The flowers can resemble an orchid, iris, or gladiola and have a sunset-like color range from pinks to yellows to oranges to reds.
All Canna originated in the tropical and sub-tropical Americas. They went to Europe in the mid-16th century and then on to Asia, South Africa, and Australia. Canna breeding took off in these regions and they have returned many wonderful cultivars to our gardens in recent decades.
Canna can be purchased in three forms: seeds, rhizomes, and potted plants. Due to the Canna yellow streak virus, it is recommended that Canna be started from seed or if rhizomes are offered, you should ensure that they be certified virus-free.
If you start from seed indoors in early spring, you can then transplant them outdoors when any danger of frost is gone. Canna do best in full sun and moist, rich soil.  If you are satisfied with having only the foliage, Canna can be planted in part-shade conditions.
Gardeners in our region have found that their Canna may reliably over-winter and return when they are planted against brick walls, along greenhouses, and in south-facing locations. You can give them extra mulch as some insurance against an exceptionally cold winter. You can also pull the plants in October, cut off the stalks, and store their rhizomes in peat moss (or similar material) in a dark, cool spot.
Canna are useful in the summer garden at the back of mixed borders, in containers, and as a privacy screen. The range of Canna sizes span from dwarf forms around three feet tall to tall standards over 10 feet.
Two of our favorite varieties are ‘Ermine’, which has a creamy yellow flower and thrives in a wide variety of growing conditions, and ‘South Pacific Orange’, an All-America Selections winner that is a compact grower perfect for containers.
For more tips about growing Canna, see our plant profile story in the Summer 2012 issue of Washington Gardener Magazine.
Canna - You Can Grow That!
The video was produced by Washington Gardener Magazine.
Visuals by Taylor Calavetinos
Audio by Kathy Jentz

➤ If you enjoy this video, please give it a thumbs up and subscribe to our Youtube channel (thank you!)
➤Remember to TURN ON notifications to know when our new videos are out
➤ FIND Washington Gardener Magazine ONLINE
~ WashingtonGardener.blogspot.com
~ http://twitter.com/WDCGardener
~ https://www.instagram.com/wdcgardener/
~ Facebook.com/WashingtonGardenerMagazine
~ Podcast: GardenDC on Spotify, Apple, etc.

Pin this for later! 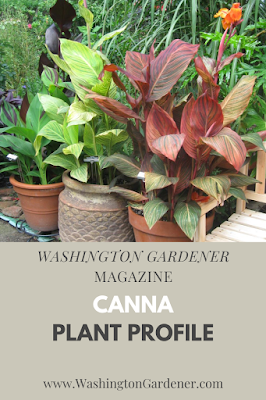 Looking for somebody to speak on gardening or related topics? Kathy Jentz, editor of Washington Gardener Magazine is available to speak in-person or virtually at your garden center, the next garden club meeting, master gardener group, horticultural events, etc. Contact Kathy at: http://greatgardenspeakers.com/listing/kathy-jentz-4c818b5cdacc5.html. We can also refer you to garden subject area specialists who write for Washington Gardener Magazine, from insects to native plants to edible gardening.
at August 03, 2020 No comments: 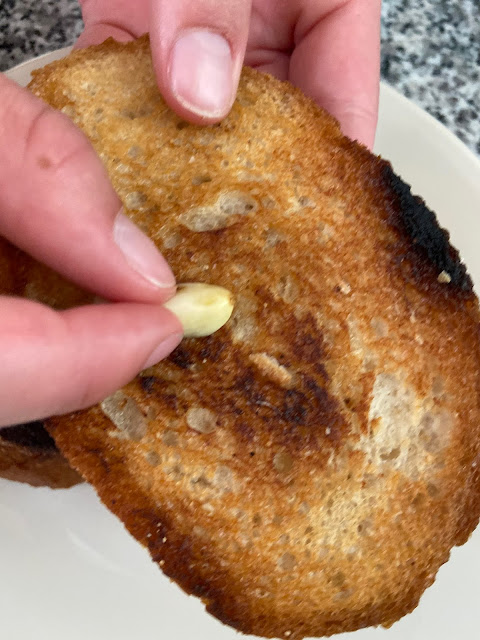 This recipe, using garlic grown in our communitygarden plot, is a quick and easy variation on garlic bread. Because the recipe uses raw garlic, the garlic bread has a slightly spicy taste. This goes well as a side or as a snack! 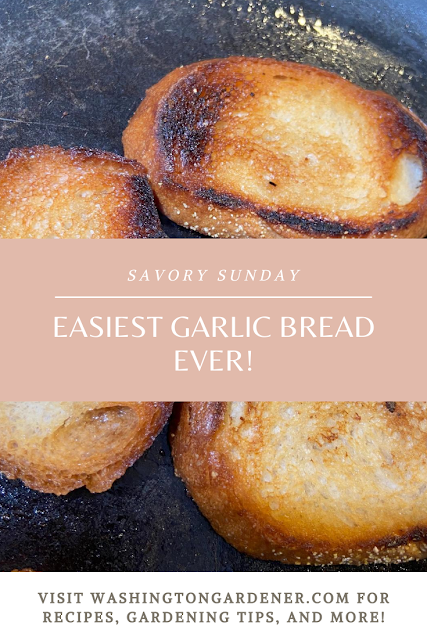 "Savory Sunday" is a weekly summer blog series with seasonal recipes from the garden.
About the Author:
Anastazja Kolodziej is a rising senior at the University of Maryland, double majoring in multiplatform journalism and the classics (Ancient Greek and Latin). On campus, she serves as an assistant managing editor at The Diamondback.
at August 02, 2020 No comments: 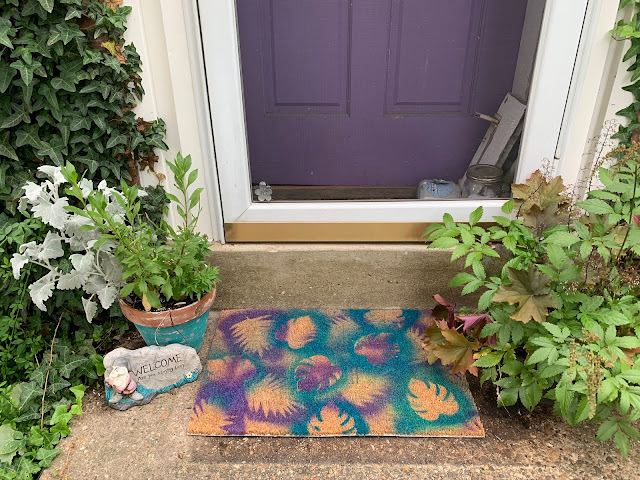 I am a doormat collector. Because my front and back door areas are not covered and are exposed to the elements, the designs wear off so quickly that I find myself going through them at least annually. Many doormats are just plain boring or the designs are not quite "right," so I decided to tackle making my own. I came across this doormat project on Pinterest and thought I'd try it out -- but take it up one notch by layering the leaf colors. 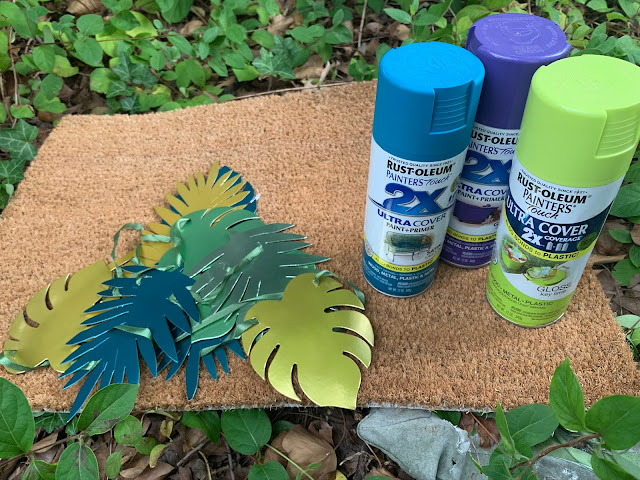 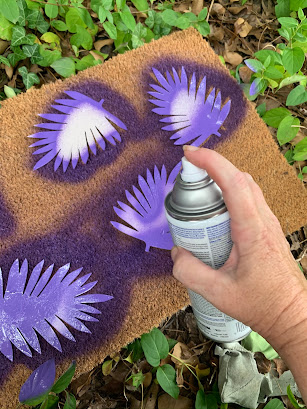 Step 1: I took a paper leaf garland that had two different leaf shapes and took them off the ribbon.
Step 2: I placed them upside down in one layer to create a random effect then spray painted around them. I let those dry for a few minutes and then lifted up the leaf shapes.
Step 3: I then placed the other leaf shapes down and sprayed around those. I came back after a few minutes to see if there were any blank spots that I thought needed a third layer of leaf painting and touched them up as needed.
Step 4: Allow to dry outside then place it outside your door.
Tips:
This post contains affiliate links, which means that if you click on one of the product links, I’ll receive a few pennies from Amazon.
This is a monthly blog series on DIY projects for the beginning home gardener. Look for the other installments in this DIY blog series by putting "DIY" in the search box here at washingtongardener.blogspot.com.

Pin This For Later! 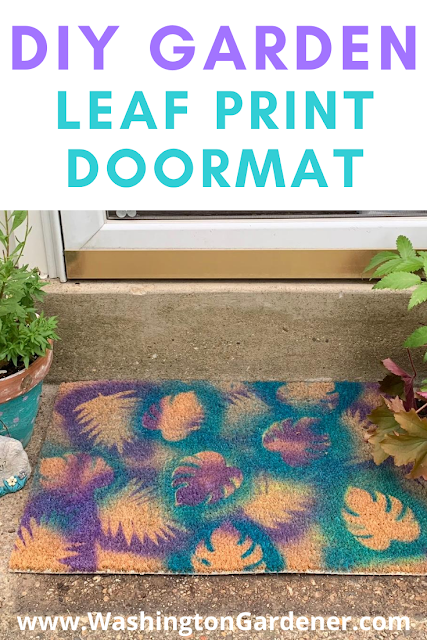 This episode we talk with Michael McConkey of Edible Landscaping about Fruit Tees. The plant profile is on Crape Myrtles and I share Low-Maintenance Lawn Alternatives. 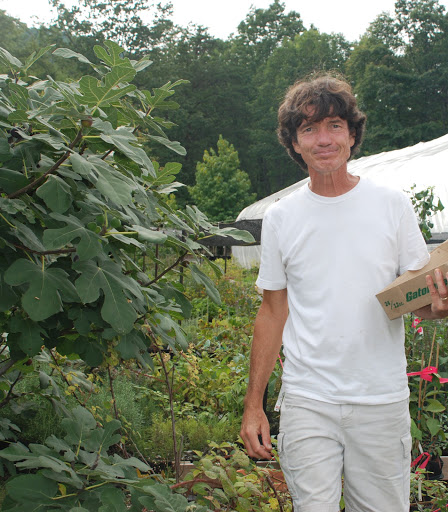 BTW, YOU can become  a listener supporter for as little as $0.99 per month!See how at: https://anchor.fm/kathy-jentz/support.

The episode is posted at: https://anchor.fm/kathy-jentz/episodes/August-1--2020---Fruit-Trees--Crape-Myrtle--and-Low-Maintenance-Lawn-Alternatives-ehg94h

It is also available on -

We welcome your questions and comments!

You can leave a voice mail message for us at: https://anchor.fm/kathy-jentz/message Note that we may use these messages on a future episode.