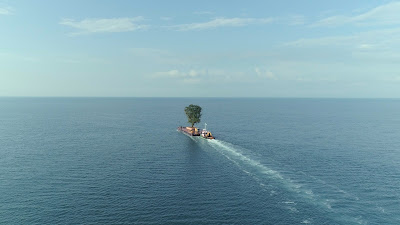 [This film is part of the Environmental Film Festival in the Nation’s Capital (DCEFF) 2021. Read reviews of several other garden-related films from this year's festival in the March 2021 issue of Washington Gardener Magazine.]

Taming the Garden is an engrossing experience from start to finish, though those looking for a traditionally informative documentary may find it off-putting when they’re met with zero voice-overs or talking-head interviews. All of that being said, if you’re willing to do a little mental leg-work, the story being told is unique, heart-wrenching, and worth a watch.
Former prime minister of Georgia, Bidzina Ivanishvili, has taken up a strange and expensive hobby: digging up ancient and rare trees from around the country to add to his personal collection. There’s something mind-boggling about moving gigantic and centuries-old trees that can’t just be told, which is why Taming the Garden can get away with showing instead of telling a story. The film’s iconic scene used as its screener preview is a tree, on a boat, in the ocean. It seems comical until you actually see it in context and then it feels… lonely. But you have to see it to understand what I mean.
Most scenes focus on the lives of those directly related to the trees as opposed to the collector himself. It’s an intimate portrayal of how one man’s incomprehensible access to a community’s environment can impact them at an emotional level. In the first 20 minutes of the film, a group of workers laugh and joke as they chip away at the earth surrounding a few of the trees slated for relocation. These shots continue throughout the 90-minute film, interspersed with interviews from said members of the town inside their own homes. It feels casual, even for a documentary, but the casualness of the interviews creates a sense of intimacy and closeness that wouldn’t be achievable in a more formal set up.
“If they force me, they’ll get it. Because I won’t compromise,” says one man about whether or not he’ll cut down his own trees. Often, smaller trees need to be cut down to make a clear path for transporting the desired trees. In this instance, the man refuses to bend to Ivanishvili’s will. As the man continues the interview, a family member pleads with him to stop talking.
In another scene, there’s a crowd gathered to witness one tree’s removal andthere seems to be a mix of emotions. Some seem detached: they take pictures and laugh in a mixture of wariness and amazement. Others are visibly upset. An elderly woman bemoans the tree's removal as it is taken away in the dark of night, saying it won’t survive in Ivanishvili’s garden. She races towards the tree as her family urges her to stay away.
Though most of the film is dedicated to the taking of the trees themselves, we are eventually introduced to the massive arboretum for which they were taken. The reveal is astonishing and sort of wonderful, but it’s hard to forget that just a few scenes before, a whole town marched behind their tree as it was taken away forever. Taming the Garden accomplishes something rare in the silence where narration should be: the space left behind leaves room for the viewer’s own thoughts, and urges the film’s impact to exist beyond its end credits.

About the Author: Khloe Quill is a journalism major at the University of Maryland, College Park, and an intern this semester with Washington Gardener. She is a native of Frederick, MD.
at March 28, 2021