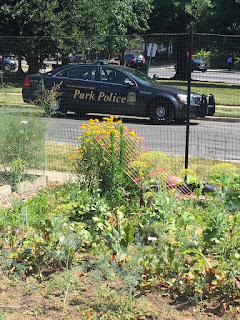 There was a break-in at the Fenton Community Garden last night. We have filed a police report and are seeking any witnesses who may have seen anything. The person(s) drained several hundred gallons of water from our Cistern, did other damage, and stole produce from individual plots.

This is really disheartening -- to say the least.

We are in a 4+ week drought now with no sign of real rain in the forecast anytime soon, so this attack on our cistern is really painful. I'll be going back over this afternoon with some buckets of water from home just to give my Zinnia seedlings some emergency water until the cistern can be re-filled.

I met with Officer Hussain of the Montgomery County Park Police there this morning and he remarked that it is a very urban corner and there are many homeless in the area. I am not placing suspicion on any group yet though -- it could be anyone from bored teens to a disgruntled ex-plot gardener.

We walked around and he pointed out several spots of possible easy entry -- I removed a stick by the front gate that could ease that access, but obviously a gate left unlocked is the easiest way... so we are asking all fellow community gardeners to lock up and double-check when coming-going to the garden.

Meanwhile, I cut down all the Cilantro and am hanging it to totally dry out and harvest the seeds (aka Coriander). More tomatoes are ripening and the cucumber and bean vines are doubling in growth almost daily.

How is your vegetable garden growing this week?


About Fenton Friday: Every Friday during the growing season, I'll be giving you an update on my community garden plot at the Fenton Street Community Garden just across the street from my house. I'm plot #16. It is a 10 ft x 20 ft space and this is our 7th year in the garden. (It opened in May 2011.) See past posts about our edible garden by putting "Fenton" into the Search box above.