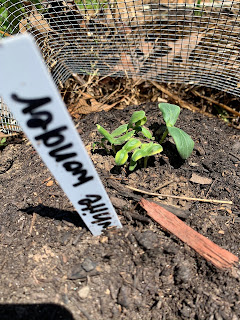 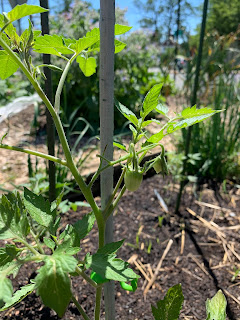 This week was really hot and humid. We also had a couple real gully-washer storms. So I hadn't been over to the plot as much as I planned except for watering earlier in the week and planting a couple Borage seedlings.

I have been harvesting the 'Snak Hero' Peas as well as making several small bouquets with the Sweet Pea 'Beaujolais'. I also cut some Salad Greens and Purple Kale.

Three of the four hills of Cucumbers had seedlings emerging this week. I say "had" as the first seedlings to emerge were the 'White Wonder' ones and they looked great. However, when we went to visit today, they were gone -- disappeared -- without a trace. We will replant that hill with new seeds next week. I suspect birds plucked these tender seedlings off the hill, so we covered one of other cucumber hills with a bit of hardware cloth wire that I had on hand. The other possibility is slugs, so I will go back and sprinkle some Sluggo (iron phosphate) around the hills later too.

Elsewhere in the plot, the Tomatoes are taking off and we even have a few baby fruits forming. One of the 'Resilience' Tomato plants also disappeared -- oh, the irony! (And yes, I blame the birds again.) Luckily, I still had one seedling from that variety in a pot at home and we can replace that next week.
The Sweet Potato slips are putting out new foliage and I was able to weed out a new area that I may use for Okra or Watermelon -- or both. I'll decide that over this weekend.

What are you harvesting this week in your edible garden?

About Fenton Friday: Every Friday during the growing season, I'll be giving you an update on my community garden plot at the Fenton Street Community Garden just across the street from my house in zone 7 Mid-Atlantic MD/DC border. I'm plot #16. It is a 10 ft x 20 ft space and this is our 8th year in the garden. (It opened in May 2011.) See past posts about our edible garden by putting "Fenton" into the Search box above.
at June 12, 2020