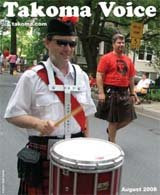 The Takoma Voice/Silver Spring Voice came by our party last month and took several photos just after the storm stopped and most of the guests made it out. The photo spread is published in their August 2008 issues on page 34 of both versions of our local community newspaper. I'm finally reporting this here as I've been waiting for the past 3+ weeks for the online version to be posted so I can link to it. (Their habitual tardiness makes me feel so much less guilty when I'm a day or so late posting our new cover to our web site!) It is finally up now and you can view it here. I've also clipped at posted it as a jpeg file below here so that you can click on the page to enlarge and read it. 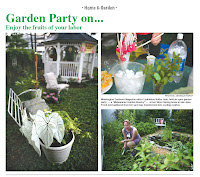 You will also want to go get the actual paper or go to their web site to see the full issue though as adjacent to this story is a great feature on mojitos, which we served at our event and are available at many fine establishments around downtown Silver Spring. The Voice reviews the different offerings. I generally agree with their conclusion that the best mojito in town is at Cubano's. The worst? Well, I won't trash any local eateries here by name, but I will say I've had a few locally mixed mojitos that were not up to snuff. Sure I'm a mo-snob, but I can forgive not having fresh sugarcane stirrers. What I can't forgive is tinkering with a proven recipe. I mean is it so hard to strain out the muddled mint before the pour? Then throw a fresh spring in for the serve. It is not cool to be on a date and to still be picking tiny, torn mint pieces out of your teeth an hour later. Nor is it cool for a mojito to be made with anything but clear rum or for foreign nasty ingredients to enter the mix -- we're talking salt on the rim or a maraschino cherry thrown in - ugh! I'm not asking for perfection here. Keep it simple and you can't go wrong.

Now all this mojito and garden party talk has me thinking that the unofficial end to summer is this weekend and a Labor Day gathering in the gazebo to close out the season might not be a bad idea. I'll check the weather reports and my schedule then post here if a last-minute function is in the plans.
at August 26, 2008