What is a spring in the Mid-Atlantic without abundant azalea blooms? Masses of bright blossoms make for a wonderful sight after a long, cold winter. Sure, they can be over-used at times, but the reason we love them so much is because they are so successful and reliable in our gardens.

Azalea season runs from April through June with early-, mid-, and late-season blooming shrubs. (Though technically, with the new re-blooming varieties, the flowering season can extend through fall.) Be sure to re-visit some of these locations through-out the several weeks of bloom so you can enjoy the changing mix of colors as different varieties wax and wane.

“My first place vote will always go to the National Arboretum,” said Mike Welsh, retired city gardener for Takoma Park, MD. “It has everything: a great collection, many different forms and varieties, wonderful lay of the land for viewing, and a central location. By far, a fascinating lore and history. It gets better, year after year. All one needs do is to go and look at the faces of whose visiting and witness first-hand their expressed pleasure and their interaction with those beautiful azaleas.”

Mike’s professional gardening domain was Takoma Park, MD, which is well-known for its many beautiful azaleas, in both private and public gardens. The location is the former home of Benjamin Y. Morrison, the famed horticulturalist who was the founder and first director of the U. S. National Arboretum. Morrison is noted for cross-breeding different strains of azaleas to produce the Glenn Dale azaleas, which are prevalent today throughout the eastern United States. Morrison lived near Piney Branch Road and many of his Glenn Dale introductions can be seen throughout the city’s private home gardens and public parks.

“Azaleas have a glamorous presence that few other plants have; beautiful azalea viewing can be anywhere and everywhere,” added Mike.
Indeed, most all of these azalea-viewing suggestion are free and open to all. A few are on private property and we ask you to respect the home owners by not trespassing and staying in the public right-of-way to take any photos.
• Brighton Dam in Brookeville, MD, has more than 20,000 azaleas and is provided by the Washington Suburban Sanitary Commission.
•  Brookside Gardens in Wheaton, MD, features more than 300 varieties of azaleas represented by 2,000 plants.
• Landon School in Bethesda, MD, hosts an annual Azalea Festival on the first weekend of May. The Perkins Gardens include 15,000 azaleas.
• The U.S. National Arboretum in Washington, DC, is where thousands of azaleas cover the flanks of Mount Hamilton in a blaze of color.
• McCrillis Gardens in Bethesda, MD, was the private collection of an azalea gardener before being given to Montgomery County parks in 1978.
• Franciscan Monastery in Washington, DC, features a hillside of azaleas in its 40-acre grounds.
• Hillwood Estate, Museum, and Gardens in Washington, DC, includes hundred of azaleas sprinkled throughout the many garden rooms.
• Green Spring Gardens in Alexandria, VA, has a small collection of natives and some Asian varieties.
• Rachel Carson Conservation Park, in Olney, MD, is known, in part, for Rachel Carson’s famous wild azaleas (pinxters), which are in full bloom in mid- to late-May.
• Norfolk Botanical Garden in Norfolk, VA, contains an azalea collection with more than 50,000 plants representing more than 550 species in full bloom. They also host an annual Azalea Celebration Week in early May.
• Cylburn Arboretum in Baltimore, MD, is known for its Azalea Trail and offers guided walks on occasion.
• Maymont in Richmond, VA, includes a Japanese Garden with spectacular combinations of azaleas, Japanese Maples, and spring-flowering trees.
• Annmarie Garden in Solomons, MD, has about 500 shrubs in its Glenn Dales collection established in 1997 and tended by volunteer gardeners.
Did we leave any of your favorite local azalea viewing spots off this list? Let us know where you go to be amongst “the royalty of the garden.” 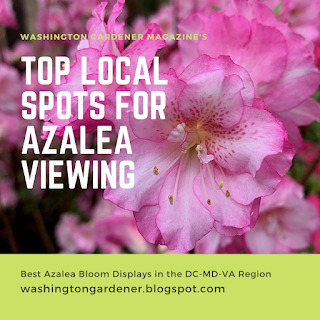