CHEF GARDENS: Up Top with Urbana 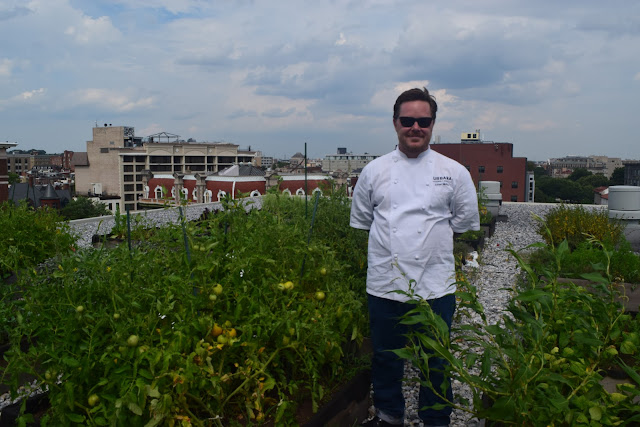 By Ana Hurler
At Urbana, executive chef Ethan McKee and his team bring urban gardening to a new level: the rooftop.
Located adjacent to the Kimpton Hotel Palomar near Dupont Circle in the heart of Washington, DC, McKee has been gardening on the hotel’s expansive rooftop for about four years. What started with seven 4 by 4 foot boxes has now grown to almost 60, all planted with a variety of rotating produce and herbs.
“There’s anywhere from 30 to 40 different ingredients on the roof that we start off with,” McKee said. "In the springtime we’re doing lots of leafy stuff: mixed lettuces, kale, Swiss chard, rapini. Some of those items we’re actually able to carry throughout the year, but we transfer in the summertime to more of the fruiting plants: tomatoes, eggplants, peppers.”
The rooftop harvests drive how the restaurant’s seasonal menu is created, with the addition of other locally sourced produce.
“What we’re doing here is our interpretation of northern Italian, Piedmont-type cuisine influenced by our region,” McKee said. “Taking things from what’s local and seasonal to us here in the Mid-Atlantic area and incorporating those ingredients.”
Planting the garden usually begins in late February, and everything is grown from seeds that are mostly organic and from sources also used by local farmers, McKee said. “So we’re using the same produce that we would source from another local farmer basically.”
Mckee said he also decided to use seeds because they’re more cost effective.
“You can buy for like $6 enough seeds for mixed greens for a whole summer for a restaurant,” he said.
At the beginning of the year, McKee plants a large amount of varieties so he can see what works well. Throughout the year, he will begin to streamline and only plant more of the most successful varieties.
“Kind of honing in on which ingredients we get the most yield out of so we have the most cost impact, especially from a food cost standpoint,” McKee said. “Also just a quality standpoint too because all the produce that we’re pulling down from our garden is straight from the garden; it hasn’t traveled, it hasn’t done anything so it has longer shelf life also.”
At the beginning, McKee said he was very excited to try growing many interesting varieties of plants, such as heirloom tomatoes, but found out their yield would only be enough to supply the restaurant for a week.
“It’s like, okay that was cool, but not really efficient for what we’re doing because we can get the same quality heirloom tomatoes from one of our local farmers that actually has a farm large enough to supply throughout the season.” 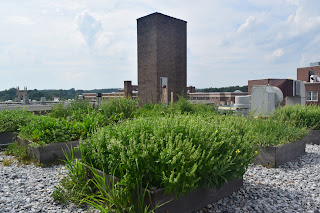 After some experimenting, McKee learned that herbs and leafy greens are the most efficient. Last year they grew around 500 pounds of basil to supply the entire season, he said.
“That’s really the goal: focusing on a few specific ingredients,” he added.
As the garden has evolved and McKee learns which plants are the most efficient, he has also had to learn how to maintain a garden of this size.
“Now we’re learning more of traditional farming practice, if you will, as far as succession planting so that we can supply ingredients for our needs throughout the entire season without having to supplement with other vendors,” he said. “Now we’ve gotten it to a certain size where we can rotate crops.”
The garden’s increased size also means it needs increased maintenance. In the summer, the garden is watered for an hour in the morning and at night. It also must be weeded and re-seeded.
“It’s now like a real earth up there so there’s just like some random stuff growing now,” he said. “Not just weeds but also plants that we planted the year before come up in other boxes across on the other side of the garden. So you get all kinds of little fun surprises of stuff that just comes up.”
All of the garden’s 4 by 4 feet boxes are 1 foot deep and made with Cedar so they last through the weather and repel bugs, McKee said. Each is lined with landscape fabric and filled with McKee’s dirt recipe: “a mixture of different composts: mushroom composts, leaf composts, we use lobster compost in some of them, top soil, vermiculites to lighten it a bit – being up on the roof we try not to cave the hotel in.”
McKee said he’s always been into gardening. While growing up in Texas, his grandmother showed him how to grow prize-wining vegetables she would take to the county fair.
“To me it just makes so much sense to do,” he said. “So I decided that if we’re going to do it though, we need to do it for real. And doing things in buckets is not really going to work for a restaurant.”
While McKee's rooftop garden cannot supply all of the hundreds of pounds of produce needed for the restaurant, he does provide a special chef experience for diners looking to taste the freshest produce through “Cicchetti at Urbana.” The exclusive experience is open to only eight guests every Saturday evening at 7 p.m. for $65 per person. Patrons get a front-row seat as McKee prepares a continuously-changing eight-course tasting menu, with nearly 100 percent of the produce sourced from the rooftop.
Below is Chef Ethan McKee’s recipe for Basil Pesto using easy-to-grow herbs.
1 cup packed basil leaves
1 cup packed parsley leaves
4 cloves garlic
¼ cup toasted pine nuts
2 cups extra virgin olive oil
¼ cup grated Parmesan
salt and pepper to taste

Combine the basil, parsley, garlic and pine nuts in a blender.  Turn the blender on medium speed and pour in the olive oil.  Blend until smooth.  Transfer the pesto to a bowl and fold in the Parmesan. Season to taste with salt and pepper.
"Chef Gardens" is a new weekly blog series featuring local restaurants with gardens in the greater Washington, DC area.

About the Author:
Ana Hurler, a senior multi-platform journalism major at the University of Maryland, College Park. Ana is interning with us this summer.
at July 16, 2017