Chef Gardens: At Ricciuti's, Farm to Table is Second Nature


“We’ve been doing kind of the farm to table thing for our whole existence before it was really fashionable, but we never labeled ourselves as that kind of restaurant back in the '90s,” said James Ricciuti, the restaurant’s owner and former chef.

Ricciuti’s is located in the 200-year-old Olney house on one acre of land in the center of town. It is just outside the Montgomery County Agricultural Reserve, so there are many small farms located within a 10-mile radius of the Italian restaurant. It is a prime location both for the townspeople and for attaining fresh produce.

“That gives us access to actually a lot of very local farms,” Ricciuti said.
Outside the front of the restaurant, there are three 4-by-16 feet beds planted with a variety of seasonal produce and herbs.

“We decided since we had land available it’d be nice just to build some gardens here and there so we could show what farm to table is all about to our customers,” Ricciuti said. “So they see us walking out there and bringing in baskets of tomatoes and squash and peppers and whatever’s in season.”

Right now, the beds are filled with “the usual suspects: tomatoes, peppers, summer squash, lots of different herbs – basil, parsley, lavender, rosemary,” Ricciuti said. In the fall they plant more root vegetables, such as carrots and beets. As it gets colder, they will switch to more greens: Swiss chard, lettuces, and kale. 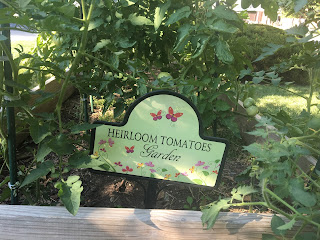 The produce from the garden is used in all facets of the restaurant. Ricciuti said they will incorporate tomatoes, squash, and peppers into many summer dinner entrees, while herbs such as lavender and basil are used behind the bar. The fresh ingredients are also used on their wood-fire oven pizzas.

“We’ve been doing it so long, it’s definitely second nature to us,” Ricciuti said. “We’re always trying to use the freshest possible product, and when we have something this fresh and this local, we want that to be the star of any dish we’re doing.”

Ricciuti mentioned their traditional Caprese salad with mozzarella, tomatoes, and basil, as an example of how they use the produce “in its freshest and simplest form when possible” by not manipulating it.

While absolutely everything that comes out of the garden is used, the small beds simply cannot supply all of the restaurant’s needs.

“It’s more or less of a little showcase garden for the restaurant,” Ricciuti said. “So the beds themselves don’t provide nearly enough produce for us, but they do provide some.”

For additional produce, Ricciuti’s turns to nearby farms in Montgomery County, such as Blueberry Gardens, the Farm at Our House, and several smaller locations. Ricciuti said he also grows some produce at home on his three acres of land. Besides produce, the restaurant also receives fresh local eggs, lamb, and pork.

“So we have a lot available just in Montgomery County,” Ricciuti said. “It’s really wonderful.”
From partnering with many local farms, to embracing the Olney House’s longstanding history in the town, Ricciuti’s is a proponent of working for, and with, its community.

“We are an independent restaurant,” Ricciuti said. “We’re very community oriented. We’re staffed with a lot of local kids – high school and college kids. We do a lot of work within the community, and we try to promote the whole gardening thing to everybody – that’s why they come out here. So we’re an advocate of the farm to table lifestyle.”

About the Author:
Ana Hurler, a senior multi-platform journalism major at the University of Maryland, College Park. Ana is interning with us this summer.
at July 23, 2017