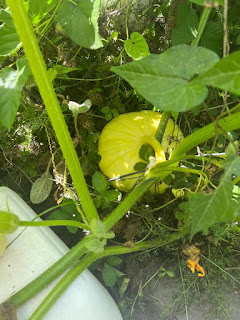 So I planted the pumpkin seeds late - very late, but I still have hopes for some decent pumpkins as several are forming in the vines now as well as dozens of additional flowers that may still be fertilized. And speaking of those fertile vines, they are taking over the entire plot! Everyday I go over and bend them back from off the pathways and back into the beds. It is insane how crazy fast they grow -- several feet a day!

Elsewhere in the plot, I'm still picking lots of cherry tomatoes, peppers, okra, and flowers. The blackberry has a few branches with more fruits forming and the basil is looking a bit tired, but is still growing.

We are prepping to start several cool season edible plants next week, so I need to decide what to pull out now to make room for them.

About Fenton Friday: Every Friday during the growing season, I'll be giving you an update on my community garden plot at the Fenton Street Community Garden just across the street from my house in zone 7 Mid-Atlantic MD/DC border. I'm plot #16. It is a 10 ft x 20 ft space and this is our 11th year in the garden. (It opened in May 2011.) See past posts about our edible garden by putting "Fenton" into the Search box above.