River Birch (Betula nigra) is a fast-growing tree that is a good choice for home landscapes. It is popularly known for its attractive peeling bark and multi-stem growth habit. It is known alternatively as Water Birch or Red Birch. It looks similar to Paper Birch (Betula papyrifera), but River Birch is more heat tolerant, while Paper Birch has a purer white bark color.

River Birch is native to the Eastern United States and hardy from zones 4-9. It can grow up to 70 feet tall, but there are dwarf varieties available. These include ‘Summer Cascade’, ‘Fox Valley’, and ‘Shiloh Splash’.

Look at local garden centers and nurseries for ‘Heritage,’ which is more tolerant of heat than the straight species.  This cultivar was named the Urban Tree of the Year in 2002 by the Society of Municipal Arborists.

Plant it in spring or fall in a full sun location. River Birch prefers moist soils, as the common name would indicate. Be sure to give it extra water during any drought periods. It tolerates most kinds of soils and likes a heavy mulching over its root zone, but the mulch should not touch the tree’s bark.

There is no need to fertilize River Birch. If you must prune it, do so after August as early season pruning can cause a sap to run from its wounds.

River Birch - You Can Grow That!

PIN THIS FOR LATER: 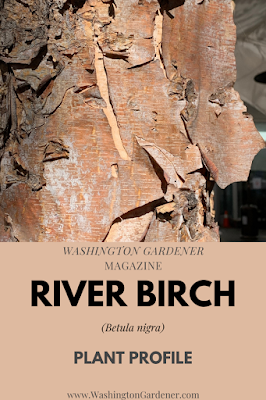