Chef Gardens: Up the Ladder at Evening Star Cafe

As the chef of Evening Star Cafe, there is nothing more rewarding for Keith Cabot than to go up to his rooftop and harvest produce for that night’s service. “There’s nothing better than going upstairs and pulling it out of the ground,” he said.
The 1,300 square foot garden provides more than 60 percent of the restaurant’s produce during the peak season, Cabot said. With the instillation of tarps to cover the beds and fans, the garden continues to produce throughout the winter, although at a lower rate.
Evening Star has served as a neighborhood dining spot in Del Ray neighborhood of Alexandria, VA, since 1997. The restaurant has several distinctive areas for friends and families to gather, from the main dining room and Front Porch, to The Majestic Lounge and No. 9 Lounge. The restaurant is open to Planet Wine next door, where Cabot creates meals paired with wines at The Farm Table. Each has its own seasonal offerings.
“It’s only 1,300 square feet,” Cabot said. “I say 'only' because that’s small for a whole restaurant, but that’s bigger than most people’s apartment. So it’s big for what it is, but it’s small in the sense of what it’s providing for. So how do we get a product to produce the fastest, the best, the largest?”
The rooftop garden started four years ago, and Cabot has been at the restaurant for two and a half years. With help from Jonathan Stark, who does handyman work for several restaurants under the Neighborhood Restaurant Group and whom Cabot calls the “master of soil,” the garden has grown and become more efficient. 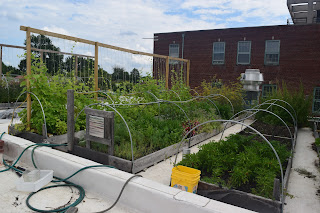 “In the last year, we really just started making it the most efficient we can,” Cabot said. “Jon was getting to know the soil, he was getting to know different plants, and he was trying a lot of things out so there was just a lot of one-offs, and to use that on the menu for a whole restaurant, you really need to see quantity.”
Now, the garden produces enough to have an item on the menu for the whole season. By dividing the garden into 24 square-foot gardening style beds, they can calculate how many blocks of each plant are needed to produce the yield they are looking for. Within the blocks, smaller herbs are planted on the outside, while larger, taller plants, such as tomatoes and beans, are placed in a row in the middle to maximize access. Cabot said they also only plant varieties they can use responsibly, and do not like to use anything with a germination of more than 80 days.
“Then the bed is just not getting used,” he said. “There’s something in it, and it’s growing, but we’re not getting anything out of it. And it really slows down what we’re able to use on the menu.”
To supply the rest of their produce needs, Cabot works closely with Northern Neck Fresh Fruits and Vegetables for deliveries gathered from local farms. This partnership also includes a weekly CSA where anyone can order a box of produce and pick it up at the restaurant.
“My philosophy is that if you know where your product’s coming from, you have that much more insight into what to do with it,” Cabot said.  “You know when it’s going to be ready, you know when it’s going to be harvested, you know how much you’re going to get. You just have that connection.”
While the rooftop garden takes much more planning, time, and effort than ordering produce, Cabot said the payoff is “going up there, climbing that ladder, and picking that produce off the plant and then using it right away.”
“The product doesn’t get any fresher than that,” he added. “No matter what anybody says, no matter how they want to phrase it, no matter what term they want to use, it doesn’t get any fresher than picking it off the plant and putting in on the table.”
The other benefit to the rooftop garden is extending the shelf life of the produce. By the time Cabot gets to the bottom of a box of produce, it’s no longer fresh. With the garden, the produce is harvested during the day and used up during the service.
“No matter what avenue of produce vendor or how you’re getting your product, that’s the number one thing,” Cabot said. “How do you manage that time to make sure that what’s going on the plate is as fresh as it can be?”
To emphasize this freshness, almost everything from the rooftop is served raw or slightly cooked.
“The fresher the vegetables are, then the less cooking heat you really apply to them, because once you apply heat to something it starts to deteriorate,” he said. “You’re losing its flavor, you’re losing its texture, and those things you’re compromising at that point.”
Rooftop produce is the centerpiece of many current dinner offerings, such as the shishito peppers with mint, feta, and lime, and the tomatoes with purslane, basil, and sherry.
“For me, it’s really about letting the produce shine,” Cabot said. “The roof takes so much time, it takes so much effort, so much thought to get the produce to a point where we’re ready to harvest it. And when we harvest it, I don’t want to do something to the product to disrespect that process.”
By serving the produce this way, Cabot gives patrons a chance to taste the full payoff of all their hard work up there. While this payoff does take extra time and resources – Cabot and Stark are already planning next season’s harvest – Cabot said working in the garden is simply what he loves to do.
“I think it’s an amenity for me,” he said. “It’s there so we can get the best product for the guests, but I’m grateful for that. I’m grateful for the garden, I’m grateful for Jon, and having those resources at our disposal.”
Chef Keith Cabot shared his recipe for Sweet & Sour Eggplant, a variation of which is currently being used in his duck dish. 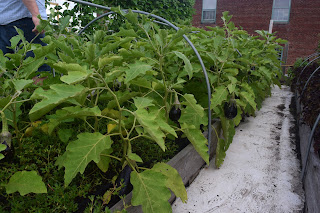 About the Author:
Ana Hurler, a senior multi-platform journalism major at the University of Maryland, College Park. Ana is interning with us this summer.
at August 13, 2017