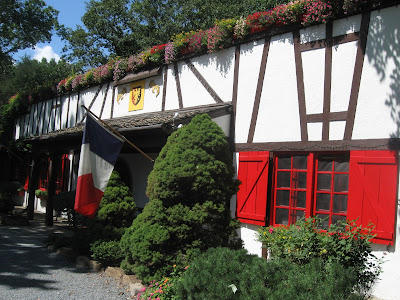 Owner and executive chef Jacques Haeringer continues his family’s tradition of serving fresh French classics at L’Aubuerge Chez François in Great Falls, VA.
“We do a seasonal menu – unapologetically French classics,” Haeringer said. “We kind of, not snicker, but we kind of go, ‘oh, farm to table, garden to table,’ isn’t that the way it was supposed to be all along? I think it’s really over used.”
Haeringer gardens about one acre of the property’s six total acres. The restaurant has always had a small garden since opening in 1976, but Haeringer greatly expanded it about six years ago because “it just was the right time to do it,” he said. The garden still continues to expand as Haeringer takes on new projects.
“We grow quite a bit of our own stuff, but it’s right here,” he said. “We like that a lot, and I think our customers – long time patrons – appreciate that it’s actually done right here and you can see it and touch it and feel it.”
“My dad was an avid gardener, and I am,” Haeringer added. “It’d be a shame with all this property not to.” 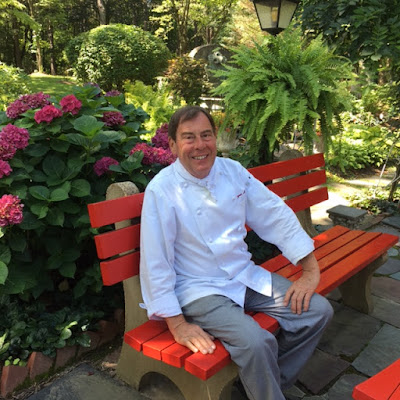 Chez François has not always been the idyllic country inn that patrons know today. Haeringer’s father, the late François Haeringer, founded the original restaurant in downtown DC in 1954. Jacques began helping his father in the restaurant at 11 years old. Eventually, changing cityscapes pushed the Haeringers to move away from DC and closer to François’s vision for the French restaurant.
“Dad had always wanted to do a country-type inn because when he was an apprentice in Alsace he worked in a country-type inn and always wanted to have one,” said Jacques. “So he looked around for properties and found this place and bought it in ’72, and then the restaurant downtown they knocked the whole block down.”
Jacques continues to run the restaurant with his brother, Paul. While the business has continued to grow – Haeringer now manages a 93-member staff – he maintains his father’s legacy of serving “unabashedly French classics” to the public.
“It’s a small business,” Haeringer said. “It’s a pretty nice sized small business, but it’s a small business – family run business.”
And business is going strong for the Haeringers. L’Auberge Chez François has been in the top 100 on Open Table in the U.S. for the last four years, and won many awards, Haeringer said. He added that he is “humbled to have such a great following.”
“People wait for it, it’s nice. They are looking forward to the local produce – our produce,” he said.
While the garden cannot supply all of the restaurant’s produce needs – Haeringer said he would “need a hundred acres” to do so – it certainly provides a great deal of seasonal produce and herbs. He said right now, all of the tomatoes and peppers come from the garden. No matter what is being planted, Haeringer’s priority is utilizing the space efficiently.
“What we do are high value crops for us,” he said. “We try to utilize the space. We do intensive farming, so we plant the tomatoes in between the rows of lettuce, and then when it gets too hot and the lettuce is gone, the tomatoes will come. … It supplies a lot, so for maybe two-and-a-half months you won’t buy any tomatoes.” 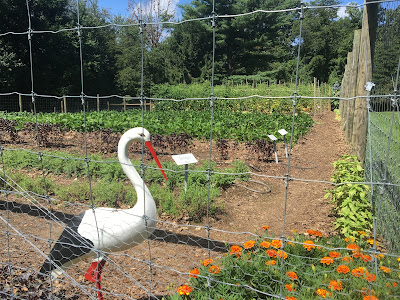 Even with all the food the garden is providing, Haeringer said it can still be a struggle to get the kitchen to actually feature the produce in dishes.
“Believe it or not, the hardest thing is getting the kitchen to get the chefs to use the stuff,” he said. “It’s so easy to get that box of lettuce – they don’t have to clean it, they don’t have to pick it, and all that stuff.”
Even so, Haeringer does not want the produce to just be used as garnishes. Rather, the produce often becomes a featured part of the dish.
“So we’ve pushed everybody, and the servers, and the front of the house people to feature the stuff rather than, ‘oh, it’s just a garnish,’ it’s ‘on your plate you will see X,’” he said. “And then we encourage people to go out and walk around the garden.”
While they continue to grow the garden, the Haeringers maintain their father’s vision of providing customers with authentic French cuisine using garden-grown produce at a variety of settings in the country inn. 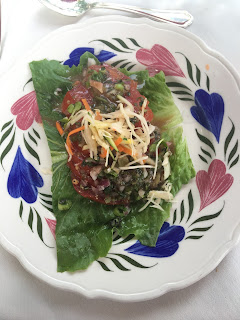 Wash the tomatoes and lettuce, drain both well. Make a bed of lettuce on four individual salad plates. Remove the stems and thinly slice the tomatoes. Fan out the tomatoes over lettuce.
Season the tomatoes with a pinch of salt and pepper, and sugar, if desired. Top each tomato with 1 tablespoon onion, 1 teaspoon scallions, ½ teaspoon basil and ½ teaspoon parsley. Pour ½ teaspoon vinegar and 1 tablespoon vinaigrette over each serving.


Ana Hurler, a senior multi-platform journalism major at the University of Maryland, College Park. Ana is interning with us this summer.
at August 06, 2017