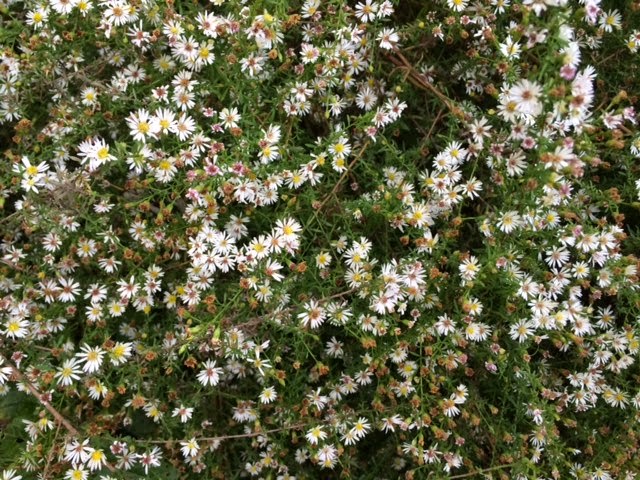 Guest Blog by Rachel Shaw
“That’s really pretty,” the woman passing by called out from the sidewalk. “Baby’s Breath, isn’t it?”

“Uh, no,” I said, “It’s a native, but I’m not sure of the name.” Embarrassing, as just a couple of weeks previously I asked a friend what the plant was. I had transplanted some from the backyard to the front to fill in some bare spots, knowing there would be lots of late summer tiny white blooms when other plants were starting to fade. My friend gave me the genus name, Symphyotrichum, saying my plants were one of two species, she didn’t remember which.

That was the information I had to fall back on when I decided to feature the plant for this post. When I looked up the genus I saw that it included a gazillion asters (only a slight exaggeration), including the White Wood Aster which grows modestly in a shady corner of my yard, as well as the New England Aster, often recommended as a native planting for fall color. Double embarrassment! If I’d had my wits about me I could have at least told the passerby that it was a native aster! But this plant, one of several that have planted themselves in my yard over the years, was registered in my mind simply as the late-blooming, fulsome plant with many tiny white flowers.

Having done my research, I think what I have is Symphyotrichum racemosum. (Though I’m happy to be corrected.) I base the ID on the Ladybird Johnson Wildflower Center description: “white rays surrounding a yellowish to pinkish central disk; heads mostly clustered along one side of widely diverging branches on a smooth, slender, purple-tinged stem.”  Common names are Small-flower White Aster or Smooth White Oldfield Aster.

The plants in my yard are 2-4 feet tall and, it practically goes without saying, loved by bees. They do seed in, but are easy to pull out if you start to get more than you want. Although some of the flowers are starting to fade, there are plenty of buds on the stems. Altogether a satisfying plant when the season is starting to wind down.

What fall natives are blooming in your yard or nearby?

About the Author
Rachel Shaw focuses on vegetable gardening and growing native plants in her small yard in Rockville, Maryland. She blogs at http://hummingbirdway.blogspot.com/