You'd THINK I'd be on the Gardeners' Side 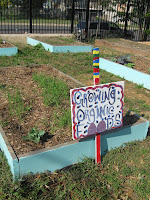 On Tuesday, the Washington Post ran an large article and photos on the front and back cover of the Metro section entitled "Garden to close for Masonic temple renovation." If you missed it, read it here.

In summary, the gardeners had been given a community garden space on Masonic Temple property. The original agreement was extended at least twice and it has been gardened for a good run of 20 years. Now, the Temple wants the space back to stage construction renovations for their 100+ year old building. They have given the gardeners seven months notice and they will be able to garden through this November on the site. The Temple has also held out the possibility they can return to garden on the space at some undetermined time in the future (depending on how extensive the renovation needs turn out to be).

While I'm sad to see another gardening space in DC go, I can't help but think the actions of these gardeners (and others like them who take their case to the media) are in the end very harmful to gardening in the city because other groups will definitely not be giving land over to community gardens (temporary or otherwise) knowing what is in store for them. The Masonic Temple should be thanked and celebrated for a wonderful two decades of generosity and not portrayed as the evil trolls who stole back gardening land.

Personally, I have run into a brick wall over and over again in DC and the close-in MD suburbs when I have begged local developers, government departments, and churches to let community gardens use their land while it sat open for several years before their construction projects began. All flat-out refused, saying that even if they said "this is a 3-year or 5-year TEMPORARY garden space,"  they knew when that period was up they would have a bad fight and negative publicity on their hands. I discounted that saying if the temporary timing was declared at the outset that there would be no misunderstandings or negativity, but now, I have to say, they were 100% right. How can I in good conscience possibly ask another organization to set aside land for a community garden when this is how they will be thanked in years to come?
at April 21, 2011