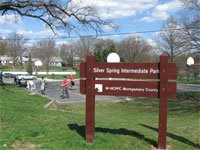 We chatted a bit about Community Gardening during our NBC4 garden segment yesterday. Linked here.

It seems everyone wants a Community Garden except for my very own neighborhood. Well, let's rephrase that as a large number of my neighbors in East Silver Spring, South Silver Spring, and North Takoma Park DO very much want a community garden plot as they are in condos, rent their homes, or have heavily shaded yards. However, the majority has been out-shouted by a very vocal and ferocious minority who want "their local park" to remain as is because it is so "heavily used."

Every day I go by this park, which I can see from my front yard, the basketball courts are routinely full of kids who walked over from DC, took the bus in from PG County, or are just in the neighborhood. This court is pretty shabby condition-wise, but it is well-used as it has a reputation far and wide of being the place for serious street ballers -- which is cool and would remain completely untouched by any nearby garden plots. The only other section of the park I ever see used is the playground and that is sporadically throughout the day as groups of young kids come and go. Again, well away from any proposed garden plot areas.

This afternoon I walked over on what it undoubtedly the most beautiful day of the year so far. It is also Spring Break for the kiddies making this prime outdoor play time. Again, they were crowded around the basketball court and playgrounds while the vast fields of green remain empty (see photos). I waited around for anyone to even run across the green. Nada. Go figure. My suspicion lingers that the actual use of these green expanses is as an illegal, off-leash dog park.

Of course, no one will admit that this is the real use of this open land and that is why certain folks are so fighting mad about a portion of the field being converted to a sectioned-off vegetable garden. Meetings have been held, alternative options have been proposed, and compromise is not in the vocabulary of the NIMBY group.
Ugly words and personal attacks have been thrown about on our local list servs and I'm sure many more have been lobbed behind closed doors. The anti-garden group created rumors that the community gardens will bring in diseases, rats, pesticides, and, heaven-forbid, dust. No proof was very proffered for these ridiculous claims, just some vague "I heard other gardens had these problems." I've seen some really bizarre behavior in a few of my neighbors and wonder about their overall state of mind. One anti-garden fighter compared himself to Moses and Paul Revere in his fight to keep the park status quo.
One neighbor told me that she had to fight these very same folks to get the playground equipment updated at the park a decade ago. Who actually denies children splinter-free play equipment? Their reason -- it might be too nice and attract more outsiders to "their park." Hm, I think I'm seeing a pattern here.
See this week's Gazette for coverage of the frustrating, Kafka-esque story. See also the story reported in the Silver Spring Penguin in more detail with community comments. 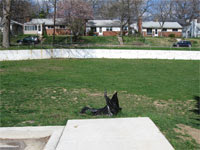 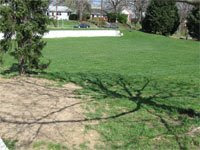 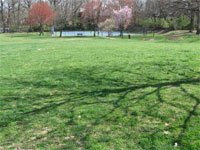