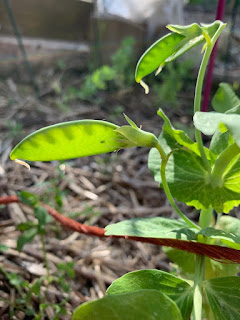 During my time as an intern at Washington Gardener Magazine this spring, one of the things I was tasked with was growing various types of peas to compare how they would grow. After planting the peas in the third week of March, we would check on the progress of my peas each week to see how they were doing.

The three types of peas I chose to plant were ‘Dwarf Grey Sugar’, ‘Little Marvel’, and ‘Progress #9’ peas. Coming into my semester at Washington Gardener, I had no gardening experience or any experience growing crops, so this was a first for me. With the guidance of our editor, Kathy Jentz, we planted the seeds about an inch deep and three inches apart from each other. Before planting the seeds in the ground I soaked all of them for about 24 hours before to let them germinate a bit so they would be a little ahead of schedule when we actually planted them. We also put wiring around the plots where the peas were to prevent animals from getting in and eating the plant while the peas were growing.

It took a little more than two weeks for us to finally see something sprout, but once we did, the emergence was quick and the first shoots were visible above the soil and straw we put on top to control weed growth.

Since it did not start to get warm up until the end of April, it took until then for me to see actual growth of the vines when they started to go vertical and starting growing up the supports I put them in front of. My first peas did not start to flower until the second week of May and soon after that the first edible pea pods formed by May 16.


Johnny Moseman is a senior multi-platform journalism major at the University of Maryland from Columbia, MD. He is an editorial intern at Washington Gardener this spring.