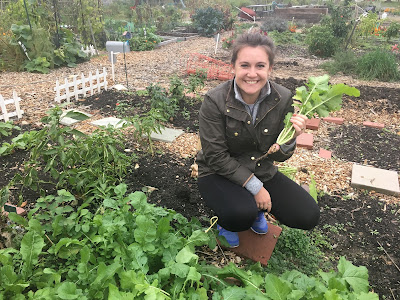 By Nicole Reisinger
One of the required projects for interns at Washington Gardener Magazine was to choose our own vegetables to grow throughout the fall semester. During our meetings each week, we would stroll over to the Fenton Community Garden and check on the progress of our plants. This season, I chose to grow ‘Seven Top’ turnips, ‘Purple Top White Globe’ turnips, and turnip greens.
I have never grown turnips before, let alone eaten them, so I was excited to try something new. They are very similar to growing radishes — a plant I’ve only ever needed to grow for a science project in middle school — so I was not too intimidated.
I was so excited to finally see something sprout out of the ground after almost two weeks of waiting (granted my patience could use a little practice). The ‘Seven Top’ and ‘Purple Top White Globe’ turnips sprouted at the same time while the greens trailed about a week behind.
My biggest faux pas when growing my turnips was not thinning them enough. I dug the holes 3-inches apart and put about three seeds in each hole. Thinking natural selection would allow the seeds to duke it out underground, I did not follow the thinning process as well as I should have. It is recommended to thin the seedlings 4 to 6 inches apart when they are 4 inches high. If I had followed this instruction, I would have probably yielded turnips larger and wider than my pinky toe. Thankfully, I was able to salvage a few plants and managed to end up with a few that actually resembled turnips.
The first frost back in October nipped at my turnip greens, but I was able to harvest a few leaves to bring home and cook. Uyen, another intern, had added her radish greens in a soup, so I decided to follow suit and try the same. I found a vegetable soup recipe by Southern Living specifically for turnip greens, and it ended up being very simple to make. It called for the addition of ham and onions, and the turnip greens were extremely similar to kale in regard to its preparation, stalky texture, and hearty taste.
I picked some ‘Purple Top White Globes’ turnips from the plot so I could give my family a little tasting for our Thanksgiving dinner. The few I gathered were not big enough to serve by themselves, so I cut them into small chunks along with some beets and carrots. I tossed the veggies in olive oil, sea salt, pepper, fresh thyme, and a tad of brown sugar and spread them on a sheet pan to roast in the oven for about 40 minutes at 400 degrees. In the end, these three root vegetables looked pretty displaying their fall colors on the table.
About the Author:
Nicole Reisinger is a senior multiplatform journalism major at the University of Maryland. This autumn, she is an editorial intern at Washington Gardener Magazine.
at December 04, 2017