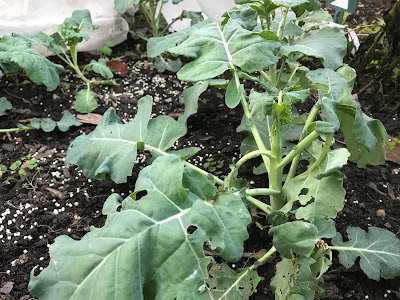 Throughout my fall internship with Washington Gardener Magazine I was able to experiment with growing two different vegetables. Though neither attempt yielded particularly successful results, the experience still proved a fulfilling one that I learned a lot from. 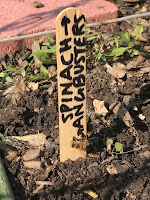 My first attempt was back in September when I planted a ‘Gangbusters’ variety of Spinach. I planted two rows of seeds and followed the directions on the packet by ensuring the seeds were well spaced apart and about an inch deep in the soil. Unfortunately, after about two weeks, the spinach still had not shown any growth. There were small green sprigs, but they were very hard to differentiate from the surrounding weeds.

Planting the broccoli was fairly easy. Though the soil was a bit hard to dig through do to cold and lack of rain, I was able to dig out six holes, one for each of my broccoli plants. In order to ensure that these plants were protected from pests, we covered them with a protective row-cover blanket. 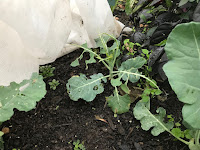 Unfortunately, the pests still managed to sneak in. About a week after planting the broccoli, we realized that slugs had been chewing on some of the leaves. After checking to make sure it wasn’t harmful to use around edible plants, Kathy applied Sluggo, a slug and snail killing bait, around the plants.

The Sluggo proved a success. When I returned a week later, the plants were growing again and showed larger and fuller leaves.


Overall, this experience taught me a lot about the trials involved in growing edibles during the fall season. I am hopeful that the broccoli I planted eventually produces some sort of yield, or, at the very least, does not become another meal for the slugs.

About the Author: Maeve Dunigan is a senior multiplatform journalism major at the University of Maryland, College Park. This autumn, she is an editorial intern at Washington Gardener Magazine.