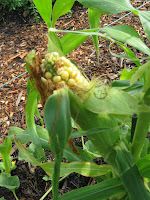 This week at my Fenton Community Garden Plot, I harvested my first ever ear of corn. I planted the corn hills a bit late in the season, so did not have high hopes for any yield. I have about 3-4 ears per plant and that is far exceeding my own predictions. I have been waiting weeks for the first ear to become fully ripe. 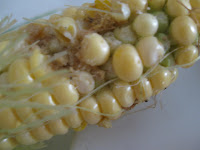 As you'll see pictured here, the first few kernels are damaged as I kept piercing one each day with my nails to see if it was at "milky stage" and ready to eat yet. When I got it home and shucked it, I saw the next few sets of kernels were being eaten by a little worm (now dead!). The rest of the ear was perfectly fine, so I zapped it in the microwave and had it with dinner. It was a bit scrawny, but it was super sweet and I have my eye on several more ears of corn whose tassels are starting to brown-up,. My hope is to catch those at peak ripeness before the little worms move in.

This week I also harvested and ate several more ground cherries and okra, a few small tomatoes, and one of my two eggplants.
at August 26, 2011