Part 2 of Save the USNA Azaleas… and Boxwoods, Daylilies, and Daffodils for that matter! 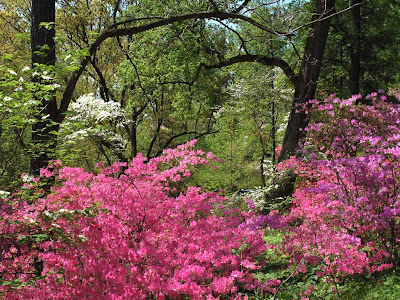 Since our guest blog post on Sunday by Don Hyatt on the planned destruction of a major portion of the US National Arboretum (USNA) azalea collection, things have gone viral. Uber-viral one might say. The story has been picked up on news sites and local blogs from MSNBC to GardenRant to the Prince of Petworth. It is all the buzz on Yahoo discussion list and Facebook pages. Disbelief and utter outrage being the two most commonly shared reactions. Many think this is a hoax. I can assure you that it is not.

The USNA de-accessioning plan calls for removing undocumented azaleas as well as the removal of the boxwood, daylily, and daffodil collections. According to the USNA: “Long-term plans already exist to remove nearly all of the azaleas of unknown pedigree on the Glenn Dale Hillside (about 20-25% of the total azalea collection) so that they may be replaced with known Glenn Dale azalea introductions massed in large groups for visual impact, and to secure the germplasm holding with multiple plants. The plan now will shift to fast-track removal of azaleas of unknown pedigree so the area is less of a maintenance burden. Most removals are expected to take place in the summer of 2011. The first steps in de-accessioning the National Boxwood Collection are the development of a complete and accurate inventory, communicating the availability of cuttings or rooted cuttings of the plants on the inventory, propagation of plants, and distribution of the resulting plants. Selected plants from the National Boxwood Collection and Perennials Collection will be moved or propagated to form the basis for new plantings elsewhere at the arboretum; for example, near the walled Morrison Garden in the Azalea Collections. This will create a smaller collection footprint that the Gardens Unit will be able to maintain with reduced resources.”

Aaron Cook. president of the Azalea Society of America, reacted: “By anyone’s conservative estimate this is at least 50% of the collection. There is valuable germplasm in this group as can be attested to by some of the foremost azalea breeders in the country… There is no active azalea breeding program going on at the arboretum… As a matter of fact, the last Azalea introduction by the National Arboretum of any significance was ‘Ben Morrison,’ which was selected from the very group of azaleas slated for destruction.” That introduction was in 1972.

The brunt of outrage has been focused on USNA garden unit leader Scott Aker -- some calling for his resignation. Scott is not permitted to reply on the record. All press inquiries are now forwarded to the Arboretum’s interim director Dr. Ramon Jordan so that the USNA message can be coordinated and clear. I spoke to Dr. Jordan twice in the last few days and here are some of the clarifications and facts he wanted to share.

“We were impressed and amazing by the outpouring of responses. I have been reading all the blog postings, comments, and online threads. The emails are streaming in and my Blackberry is on fire. We are grateful for the public’s interest in the USNA and pleased to see how many regard the Arboretum and the azaleas in particular as a national treasure. That tells us that we must have been doing something right to garner such love and loyalty and that Scott Aker’s guidance of the garden directions is indeed praiseworthy.”

“We have heard the responses and are definitely taking a second look at our decisions. There have been some creative solutions proposed and all of them are being considered. I will be reevaluating with all these responses in mind.”

“The fact is we did lose the private funding of two gardener positions and addressing this has been a very difficult decision that we had to make. While we still have them (through February 2012), we need to use them, while we can, to catalog and move the plant collections to save what we can. This is a huge loss for us. It is 10% of the USNA staff, but really 30% of the actual gardeners.”

“The USNA has 159 volunteers who gave us 10,000 hours of labor which is equivalent to 6 full-time employees. We’d love to see an expansion of that volunteer program. Truthfully, though, most of our volunteers are retired and they are not able to do much of the tasks that we need in the gardens.”
“Our funding budget is flat – both the congressional contribution and from FONA – in terms of real dollars we are actually losing value every year.”

“This is nothing new – in the past the USNA has had to announce de-accessioning of collections due to severe budget cuts, but the reaction this time has been overwhelming.”

“We do have a challenge in being the only Federally funded arboretum and our mission is research, education and public outreach. We are looking at all funding alternatives. Since we are a Federal agency we are limited in the ways we can do that, but we are allowed to sell plants or plant materials [seeds, germplasm, propagated cuttings]. For example one blog poster suggested auctioning off the plants to raise money and to give them a permanent home. Our Koi auction last fall raised $10,000. FONA has said they are happy to help with a fundraising event of that sort. The problem is this one-time fundraising is not sustainable and in a year or so we’d be back to making the same tough de-accessioning decisions. What we need is a sustaining solution to keep these two garden positions funded ‘permanently.’”


“The abandonment plan some have proposed will just not fly. We are the USNA and we need the ground to be maintained at a level to our standards. We cannot just let a section go to weeds, disease, and invasives. The azaleas require much more high-maintenance care than others have implied. For example, there is regular pruning and spraying for diseases.”


“Arguments can be made for one collection over another and we are open to hear them. Many question why, if the private funding of the two positions for the Asian Valley was what was lost, the other collections must suffer. But we manage the arboretum as a whole and have to evaluate it that way. We created a decision-making matrix and again, it was a difficult process, to choose among factors such as public appeal, plant research potential, industry interest etc. “


“About 75% of the crape myrtles sold in the US come from USNA germplasm, I don’t have the corresponding figure for the azalea collection, but I know it is of value to the horticultural industry and that is one of the constituents that we serve.”

“My key take-away points are that we do have time both for finding funds to replace the two positions and  yes, we can and will re-evaluate the decision to de-accession plants at the U.S. National Arboretum.”


Dr. Jordan will be sending a more detailed responses to my questions after the holiday weekend, so look for a Part 3 next week. Meanwhile, a letter dated November 15 that he wrote to the major stakeholders is posted at the Save the Azaleas web site here.

Since Don Hyatt’s guest blog post went up, a Web site and Facebook page have gone up to marshal support for saving all the azaleas. The local and national plant societies for Boxwood, Daylilies, and Daffodils are also gathering their troops and deciding how to proceed. The Friends of the National Arboretum (FONA) have indicated that they will also be putting together a statement and plan of action and I will announce those updates as they become available.

Dr. Jordan indicates that there is a possibility of a meeting of all stakeholders and the general public with the USNA decision-makers – details TBD.

Photo credit for Save the Azaleas blog posts: Don Hyatt
at November 24, 2010