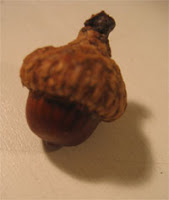 So first the WaPo prints a story about the lack of acorn crop this year, then today I got this in the CCAN Climate News enewsletter:
>>Have you heard the unbelievable news? Oak trees across most of Maryland have failed to produce a single acorn this year!! It's true! Some naturalists believe it could be global warming. It's the kind of ecological weirdness scientists say could be in store with more climate change.<<
C'mon now! This is just the kind of fear-mongering, quasi-scientific-based misinformation that critics of global warming will pounce on. When people write this things based on slim anecdotal evidence, it only invites more scorn and doubt on the green movement.
In my own backyard, the acorns have been quite abundant this fall, though smaller in size than the past few years. I've had so many that I had to go down to the hardware store and buy a new street-worthy broom to sweep them all up off my walks and driveway for the safety of those who walk there.
Last year and the year before, folks were yammering about the incredible acorn overload we had after a few years of light or no production. Nobody that I recall claimed it was global warming during those very unusual acorn boom years. It is just another of Mother Nature's mysterious cycles. Some years we have great tomatoes and bad melons, sometimes that reverses. Sometimes we know why (a cool, long spring) and other times we never will.
at December 02, 2008