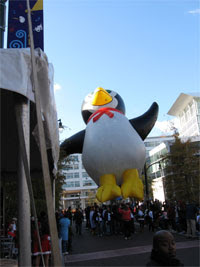 So I get invited to sit in the grandstand at the Silver Spring Holiday Parade. I have seen this parade for years from various points at street level and even marched in it myself as part of the Purple Line (pro-transit) group, but I had yet to see it from the VIP section. The good part is that we are right next to Channel 7(8)'s Doug Hill announcing and explaining all the parade participants. Most are self-explanatory and are well-signed, a few though I was glad to have Doug describe. You get to hear fun facts like that Miss Maryland 2008 , Louise Schlegel, is from Silver Spring, but competed as Miss Allegany County. I see after googling her that this was her second year competing for the Miss Maryland title. I don't know about you, but for me, beauty competition are so odd a concept, it is liking learning about the strange customs of a foreign country.

The other fun part was that my friend, Saunya, got to be interviewed on her favorite part of the parade -- "the Bolivian dancing groups" for the record. After the 5th Bolivian dancing group in the route though, one wonders if there were any DC-area Bolivians NOT in the parade. The other good part of the grandstand seating is that all the groups pull out the stops when they come in front of you so that they can be filmed and judged. Though that can be a mixed blessing, it gets kinda awkward when the entire marching band is inches from your face -- you sort of don't want to stare them down, but then looking aways seems rude. Then there is the up-close, high volume brass and drum section, which today was not too bad as it was so frigid (28 degrees!) that I had 3 hoods/hats on covering my ears! 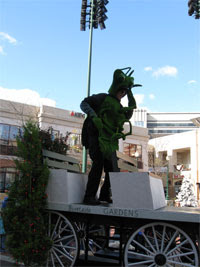 Here are some pics I took - mainly of the crew from Brookside Gardens. I'm not sure who is in the Mantis outfit. Whomever it was, he definitely had his Wheaties this morning -- a lot of pep in that step! 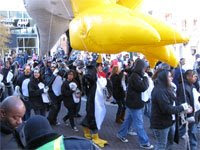 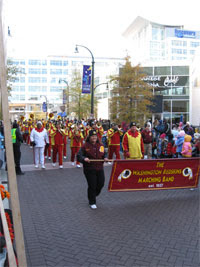 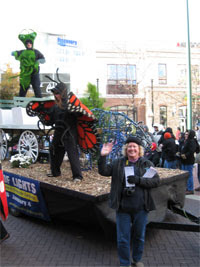 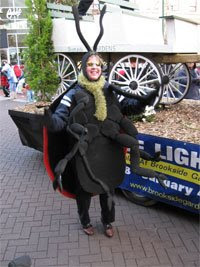