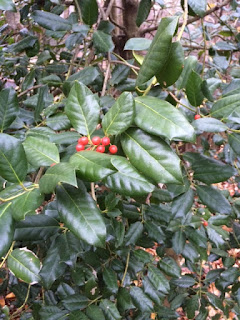 American Holly (Ilex opaca) is familiar to many people; with its evergreen leaves and bright red berries it is often depicted on Christmas cards or used as a holiday decoration. Before moving to this area, I had been aware of it only in this festive capacity, and thought of it simply as "Holly." It was not native to the part of the Midwest where I had lived, and I had never seen it growing outdoors. I knew the English folk carol, "The Holly and the Ivy," and on that basis I suppose I had assumed the plant was from England.


In fact Ilex species are found in England, the U.S., and in a wide variety of places around the world, some 400-600 species, according to Wikipedia. An article by H.E. Grelen for the US Forest Service describes American Holly as “primarily a plant of the humid Southeast,” although its northernmost range begins in coastal Massachusetts, extends into Appalachia, and can withstand the cold of Zone 5. The article begins with an interesting bit of history:

When the Pilgrims landed the week before Christmas in 1620 on the coast of what is now Massachusetts, the evergreen, prickly leaves and red berries of American holly (Ilex opaca) reminded them of the English holly (Ilex aquifolium), a symbol of Christmas for centuries in England and Europe. Since then American holly, also called white holly or Christmas holly, has been one of the most valuable and popular trees in the Eastern United States for its foliage and berries, used for Christmas decorations, and for ornamental plantings. 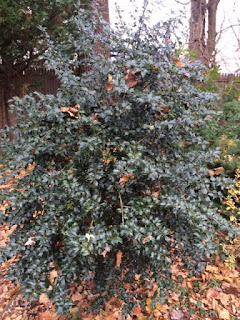 There are two American Hollies in my yard, with somewhat different appearance. One, growing under the shade of another tree, is tall and rather leggy -- if a tree can be described as leggy! After the cold and ice of the last couple of winters some of the leaves were damaged and turned a silvery-brown, but the tree appears to have recovered well. The other tree is in an area with a bit more sun as well as some protection from wind, and did not show the same leaf damage. It is also a smaller and more compact tree, with smaller leaves and a somewhat rounded top.

Since both trees were here when I moved in, I don’t know much about them. There are apparently many cultivars of Ilex opaca, and I don’t know if one or both of mine might be cultivars. I had assumed that both were planted at the same time, but it is possible that the taller one is also older. The University of Kentucky Department of Horticulture website describes the American Holly as becoming “open, irregular, and high branching with age.” So perhaps my taller, more scraggly tree is also older.

I have to be honest and say that I do have quite the strong attachment to my two Ilex opaca that I feel for many of my other native plants. (Perhaps it has something to do with the prickly leaves – you don’t really feel the urge to hug an American Holly!) But the berries are good food for birds, and the trees are a pretty sight as part of a snowy landscape. Now that I’m thinking of it, I may go out and cut a branch or two for decoration. Happy holidays, everyone!


About the author:
Rachel Shaw focuses on vegetable gardening and growing native plants in her small yard in Rockville, Maryland. She blogs at http://hummingbirdway.blogspot.com/.

She will be taking some time from being our monthly native plant guest blogger for the next few months and plans to return to it sometime next spring.
at December 10, 2015