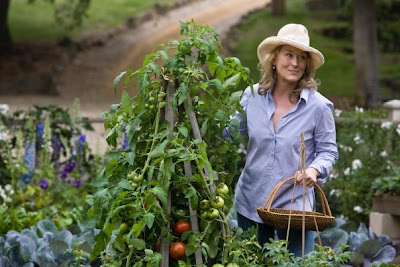 Many of you who know me personally, know I'm a movie addict. Seeing three films a week in the theater is not unusual for me. If I add cable/DVD movie viewings, my weekly average would be about 7, I'd guess-timate. Loving movies as I do and seeing so many, it is easy to compare and contrast especially in their treatment of my favorite hobby and the #1 pastime in the world by over-whelming numbers: GARDENING. So what did 2009 bring us onscreen?

Well, let's talk bad first and get that out of the way. The worst landscape of course would be The Road. A truly life-changing, must-see film and book. It is a desolate, bleak version of our future. Hardly a seed survives the unnamed ecological disaster that brings on the end-times. Yeah, depressing, yet oh so compelling. My pick for best movie of the year.

My award though for worst garden depiction goes to Everybody's Fine. *sigh* This film COULD have been so good. The movie's main character, a retired widower father, is a die-hard gardener after all. However, in the first 10 minutes of this flick, gardening is disparaged 3 times. Basically, it is implied that gardening is for old cronies with one foot in the grave and an awful snoring bore. We see the dad out in his North Carolina garden which he meticulously tends doing cruel things to his neighbors shrubs that dare peak over their shared fence. The fact that his window boxes are filled with FAKE flowers is another alarming element. Then there is the depiction of anyone over 50 as an utter idiot and technophobe. I won't spoil it for you should you go, but trust me, if I was in that age-bracket it'd get my hackles up. Insulting and the AARP should take note and sue.
What gets this my WORST award though is the movie's depiction of powerlines/utility poles. These obscenely ugly scars on our landscape are shown over and over in long, loving cinematic shots. We are supposed romanticize how these lines connect us all. All I see is a blight on our national face. If the film was better, I suppose I could forgive all this. It is about the level of a bad Lifetime special. Skip it and get the Italian original instead Stanno Tutti Bene.

Now for my award for BEST and just squeaking under the 2009 wire as it officially comes out on Christmas Day: It's Complicated. Fellow Gardeners, run, don't walk, to the theater and SEE this. You will get hints of Meryl's character's marvelous garden at her Santa Barbara, CA home throughout the film, you see it at the edge of several scenes. Getting to know her, you just know it is coming. Her children: angelic darlings. Her ex: a cheeky, charming child-man. Her new beau: sweet as pie. Her restaurant: warm and inviting. Her wardrobe: straight out of Chico's catalog. Her hair: care-free and colored just so. Her home: a dream with a seaside view. Her cooking: drool-worthy. Her friends: supportive and hilarious. You just KNOW her garden is going to be to-die-for. No garden on film has ever equaled this one. Rows of perfect cabbages, carrots, and beans -- everything bug- and blight-free. Impossible in real life, but who cares? You want to hate her, but damn, how you want to BE her. This film is will do more to sell gardening than a thousand Michelle Obama photo ops. Relish every minute of it.

(If only you knew how hard I worked to find and copy that one garden pic from the film! Sheesh! See it full and in all its glory in the theaters or online at the Gallery section of the official film web site here.)
at December 11, 2009